When us “older” birthmoms try to tell pregnant women, who are planning on giving up their babies, that they have fallen for the coercion of the industry, we are often faced with opposition. Whether that industry is agencies, attorneys, or the media, in general, they all seem to parrot the same types of statements.

“I’m not even working with an agency so how is it possible for them to coerce me?”

“I’m not being coerced, I made this decision before I even contacted an agency.”

“That’s not possible because I’m running the show and everything that is happening is because I want it to happen.”

When you tell them that their views on adoption have been shaped by the subtle messages being conveyed by the industry, they deny ever really thinking about adoption until they became pregnant. Even our media, it seems, has been charmed by the industry.

I’m sure, by now, you’ve all seen the photographs that were posted showing a happy adoptive couple with the new baby that was “delivered to them” via the stork. Yes, the stork. Their words, not mine. In fact, it was a “stork drop” adoption. This term is used in the adoption community to describe an adoption that occurs when the mom has made no earlier adoption plans. It varies slightly, how much background information is known about the mother and father of the baby in question. I’ve done some reading up on forums about how prospective adoptive parents feel about these type of adoptions. The general response seems to be “but what if I get a defective baby because I don’t know the background.” The Olson family, however, was okay with a stork drop adoption and that is how we all came to learn about their vague story.

This story went viral. This stork drop adoption with the perfectly staged and edited photos made to make adoption look like a fairy tale. I looked into the couple who adopted a bit. It seems that one of their sons (they have 2 biological sons) was born with Spina Bifida. Because they didn’t want to risk having another baby with birth defects they did not conceive again. But that’s now where their story stops. They just felt their family wasn’t “complete” without a third child because that had always been the plan. They never come outright and say it, but not only did they want to adopt so they could get a “perfect” child, it seems that only a girl would suffice. Although it seems to now be gone, as of yesterday their website included terminology for an expectant mother that eluded that they only wanted a girl. A final line said something like, “We can’t wait to adopt our little girl!” Additionally, a YouCaring page set up for them says, “Help David and Sarah complete their family and bring their little girl home!  Your contribution of any kind will help towards the costs involved with this process.” Only a girl would do, I guess. Sounds like they wanted the mail order perfect baby to me.

The Olson family isn’t the subject of my post, however. I am using their story as an example for the real point of this article. Their story went VIRAL. Their photos are being praised by the masses around the world. The photographer made them look like movie stars and she did a fantastic job of promoting domestic infant adoption as a fairy tale. In this case, though, a picture is not worth a thousand words. It’s the words the pictures stay silent about where my concern lies.

I wouldn’t doubt if millions of people have seen these photos and read this story. Nowhere is the birthmother mentioned, not even a specific thank you to her directly from the Olson’s. Her story or the stories of other birthmothers are not shared. Adoptee stories are not shared. The term “birthfather” isn’t mentioned at all. I can’t help but wonder if he is even aware he has a child or if his consent was even obtained ethically. Other adoptive parents are mentioned and how great they are. This story irresponsibly glorifies adoption. It is subconsciously influencing and coercing the decisions of many mothers and mothers that will come.

I ran across this in a birthmother support group: 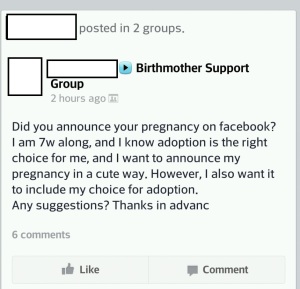 The first picture is her original post. First, I don’t even want to get into the psychology behind deciding on adoption when you’ve literally JUST found out you’re pregnant. I don’t think a decision like that should be rushed into so quickly. How could she have possibly done an adequate amount of research to come to that decision? Notice everyone encouraging her. Notice how she can’t wait to make some kind of an announcement and incorporate adoption. This is the hero complex of adoption. The way the media portrays things, the way the industry wants them to portray things, is that a birthmother is a hero and she is doing something so wonderful for other people who would otherwise not be able to do it for themselves. Only part of this is true. Someone else would not be able to do that for themselves. But, you see, this is part of the coercion of the industry in general. Become the hero of not only your OWN story, but the hero of someone else’s as well. Grant someone a wish!! Be that genie in a bottle! I’m sorry, baby’s are not presents to be gifted to other people.

Notice the comment from the original poster in the third picture. She wants to make an announcement about her choice of adoption with a stork. A stork. A stork. Let that sink in. Coincidentally this was posted just days after the news story about the Olson’s was released. Did their story have some sort of influence on her? Is she missing something in her life that she needs to fill? Does she need to place value on herself by going through with an adoption plan? Maybe millions of people will be praising her. And if they aren’t praising her specifically, she will fit into that “birthmom” club. Even if she hasn’t given birth. She has declared herself a birthmom. Certainly the thousands of comments on the articles and Facebook posts about the Olson’s would include her as well. “Birthmothers are so brave!” or “Birthmothers are so selfless!” This young woman has romanticized adoption. Why shouldn’t she? Everyone else is. Everyone else is ooohing and aaaahing and goozing over these viral photos. Why would she not want to be included in that to fill a void of value in her life?

Most women do not even publicly announce their pregnancy, save close family or friends, until they are safely past the date where miscarriage is still a risk. Typically this is 12 weeks. This woman is planning on not only announcing her pregnancy on Facebook well before that mark, she is also incorporating adoption into it. She’s not excited to announce her pregnancy (which would be understandable) she is excited to announce the adoption. I simply cannot understand how anyone would be excited about being pregnant and not being able to parent the child you were carrying. I wasn’t excited. I was sad. It wasn’t something I “couldn’t wait to announce.” Throughout my entire pregnancy I prayed for a miracle to happen before my daughter was born so that I wouldn’t have to go through with an adoption. I wasn’t excited.

The portrayals of adoption that make the headlines are mushy gushy adoptive parent gets what they wanted and all their dreams come true. It doesn’t show what happens to the other parties. It doesn’t show suicides, depression, self-harm, medical illnesses that could have been avoided if a solid medical record was available. It doesn’t show PTSD, sleepless nights, the hole in your heart, or the tears that flow – for  years and years and years. It is portrayed as a fairy tale. It has subtly and pervasively influenced the public opinion over years and years. But it is far from accurate. It is like a coercion that has happened to the majority of the public. It lives in everyone’s subconscious. It thrives there. Who needs an agency to coerce your opinions when the coercion has happened since you could see pictures and understand words.

Some may ask, “Why shouldn’t we be encouraging young mothers to give up their children if they aren’t financially stable or married?”

To that I say, why do they deserve less to be a mother? Why do their children deserve less than to be raised within their biological family? What are you doing to help preserve these families and give women the tools they need to overcome their obstacles?

Babies are not blank slates. Mothers do not forget. Adoption isn’t a black and white photo.