This New Year’s Eve I have taken some time to contemplate where I’ve been, where I am, and where I’m going. A new year is upon us, and that usually comes with resolutions we make with all the best intentions, but somehow fail to follow through with. I don’t even bother anymore. This year, so many things have transpired in my life that I can’t help but look back on not just 2015, but all of my previous years and the trials and triumphs that came with them.

Almost 11 years ago, during a very trying time in my life (both financially and emotionally) I left everything I knew and that was familiar, with my kids, and moved to a different state. I had no job, no home, and relied on the kindness of family to help me on my feet. It was one of the scariest experiences as an adult that I can remember. No real stability and structure, I was left wondering if we’d ever be okay. All I knew is that we were on a sinking ship and this move was the only life raft I had. There was no choice but to make it work.

I was almost 4 years post-relinquishment and almost 2 years post-“no more direct contact,” even though I wasn’t aware of this quite yet. My financial struggles had been devastating during my pregnancy and while improved slightly, things were starting to go down hill again. Almost immediately after relinquishment I began a descent into panic disorder (something I had battled with previously and seemingly overcome) and that led to a slow climb down to agoraphobia. I wasn’t completely house bound, but going further than the local grocery store, 2 miles away, triggered panic attacks so severe I thought I would die. Going outside an area of about 200 feet, surrounding my house, triggered anxiety attacks, but they were manageable. Everyday was also a battle, even if I never left the house, with racing thoughts of having every medical disease known to man and being quite sure I was dying from it. Thank God I didn’t have the Internet back then. Who knows how much of a frenzy I could have worked myself into.

Those 4 years after relinquishment were probably the hardest on my mental health. I didn’t recognize it as that, however. It never even crossed my mind. I believed that what I had done was healthy, heroic, and the best thing for my daughter and myself. How could the two things correlate with one another if that was true? Looking back, I realize those things started to gear up during my pregnancy. With the anticipation of having a baby and the inner thoughts that I would have to let this baby go, it was decided that to manage my mental health, I would be put on Paxil. Yes, during pregnancy and before doctors were really aware of the hazards to the baby. Thankfully my baby didn’t suffer any of the horrible things other babies did, but it still speaks volumes as to what I was going through. After relinquishment, things really started to kick into high gear and the panic attack express seemed unstoppable.

Understanding that a change was needed, and refusing to let my disease get the best of me, I braved a 5 hour car ride, to another state, with my mother in the driver’s seat, in hopes of a new life, a fresh start. I ran away from my demons, my past, my sins, my tragedy, my old life.

The car ride was interesting, to say the least. I will compare it to being trapped in a fragile bubble, adrift at sea, with sharks swarming all around. There were frequent stops, frequent tears, frequent hyperventilating. But, I made it…almost in one piece.

I had also left behind the father of my children, the father of my relinquished daughter. Our relationship had taken a huge blow, thanks to my mental health and insecurities, so I thought it best to go – and go I did.

The first few months were okay. I stayed with my brother for about a month, found a job at a fast food place, got my own little duplex, and pretended that this was what life had been like all along. I missed my significant other tremendously and every time one of our kids would ask for him I would retreat to my bedroom, the bathroom, for just a moment to weep about all we had lost. About 3 months after the big move, he came to visit for Christmas. The kids were thrilled and it was nice to have him there for those few days. It also brought the new realization that we were not ready to throw in the towel and weeks later he also relocated to attempt to fix what had been broken.

With him, I learned to utilize the public transportation system, had some more self confidence, and extra help with the kids, as well as an additional income. Things were far from perfect – we struggled and struggled good. Walking a sick 2 year old to the doctors in the snow, bringing shopping carts home from Walmart filled with groceries and then walking them back, because who steals a shopping cart? Struggling to pay bills, amongst other things.

There was one particular bus stop. It was grand central for transferring to the other lines that enabled me to expand my world a little bit at a time. It was also central to removing the boundaries of my life that had been self-imposed yet involuntary.

Years went by, things improved, slowly but surely. We worked hard, we screwed up, we loved, we fought. We were together and I slowly began a path of healing. 7 years ago we moved away from that first town we had lived in here. We went further north, away from the hustle and bustle of the city, to a place with corn fields, neighbors you knew, and small schools.

Recently, I began working in that same town from 7 years ago. The one we got our new start in. The job requires parking in a city lot a few blocks away from work and walking the rest of the way. It’s a nice walk, through downtown, passing all the small shops and wonderful smells of the restaurants that reside there. Every week day, in my business casual, I take those 5 minutes to take in the day, reflect on the things I need to get done, and look through the shop windows, making mental notes of places I want to shop later.

One week, while waiting for the crosswalk to give me the okay to cross the street, I glanced to my right and saw a city bus. It was at that one bus stop, years ago, that became cathartic in my healing. I saw women with babies, who looked tired and defeated. I saw young men in shoes with holes waiting to get on that magical bus of mine. As I glanced down at my leather heeled boots, I was reminded that where I used to be is not where I was. In the moment, it seemed that’s all there ever was or would ever be. It seemed hopeless and sad. It felt as if my life would forever be riding buses and wondering where the next meal would come from.

I came to a sudden realization – I didn’t even realize how much my life circumstances had truly improved over these past 11 years. It came on so subtly, so slowly, I didn’t truly understand the stark contrast. I knew I was better off than I had been, but truly didn’t realize just how much. Then a sadness crept over me as I thought, “if I would have just trusted in myself, she would be here, too.” I made it with my parented kids. I made it. I made it. I’m not rich or famous, but I made it. I’m living the dream. This crazy, fantastic, beautiful dream. The messy house, the staying up too late, the homework, the coffee in the morning paired with Visine for over-tired eyes, the shoveling snow in the driveway, the mowing the lawn, DREAM. This is it. My kids are happy and healthy, and turned out pretty damn good if I do say so myself. I have my husband, and he has his wife. It would all be absolute perfection except there is one missing. She didn’t need to be missing, but she is and that shatters everything. It will always be the shadow that keeps me from believing the sincerity of this dream.

If I had a TARDIS (you thought I’d say time machine but get with the times) it could be different. I could film this beautiful life and show that scared young woman, that was my former self, how it all would turn out. But, I can’t, and nothing could be more tragic.

While I reflect on my 2015, I can’t help but remember all the years before it. I wish I could show all those that will come after me what this beautiful life looks like and how tainted it will always be because of that missing piece. I don’t have a TARDIS. Maybe this will be enough, though. 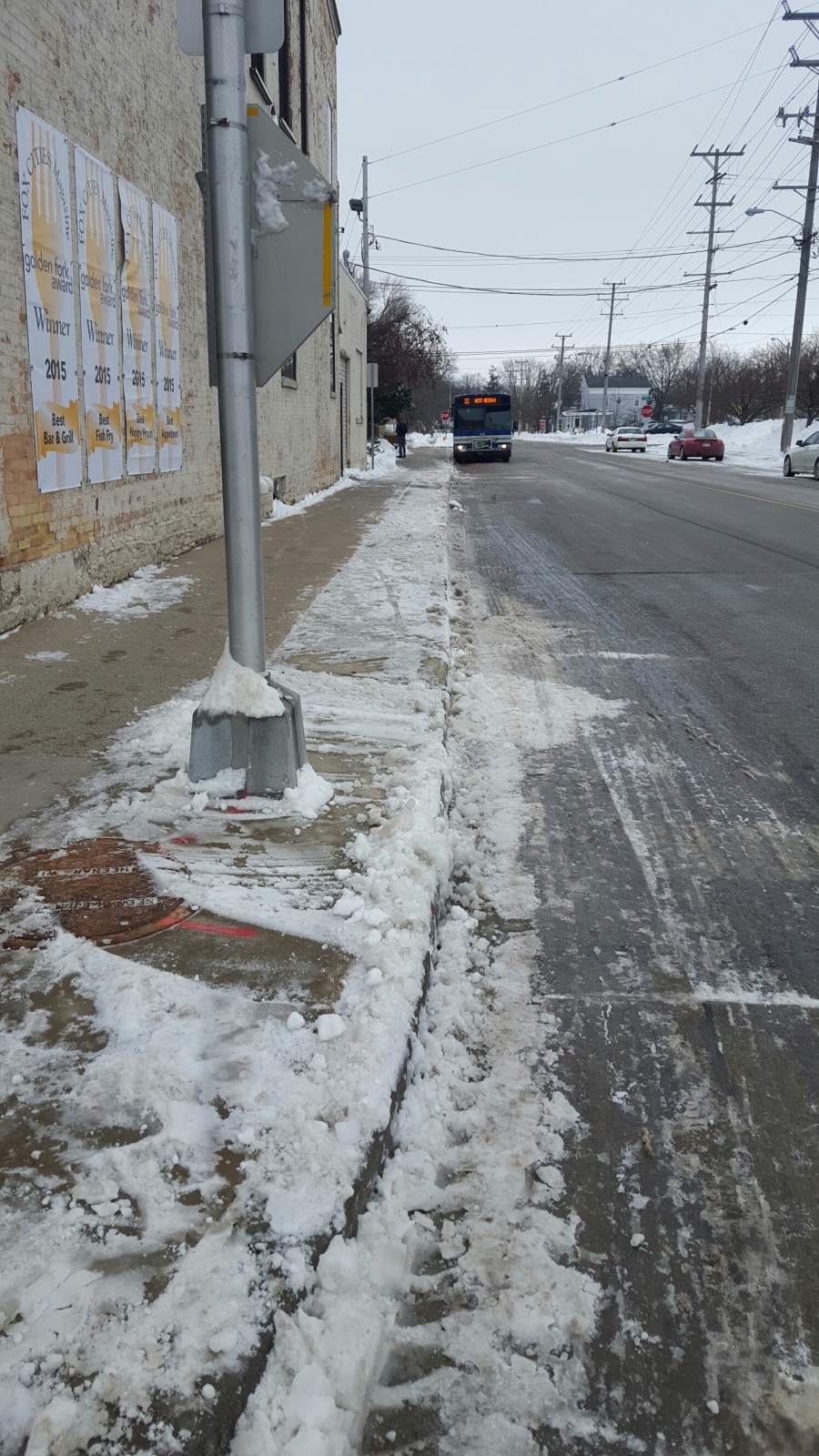 5 thoughts on “A Reflection For New Years”