Kimberly Rossler and her son, James Elliott Rossler, or Elliott as she calls him, are being victimized by a corrupt judicial system that involves pre-birth consent that is still allowed in Alabama. Since going public, Kimberly has received a lot of support but she has also received a lot of hate, as is to be expected. Suddenly, it seems, everyone is a lawyer and everyone knows everything about adoption and adoption laws because their sister’s friend’s cousin’s uncle’s third wife tried to adopt a baby. I want to go over some general adoption guidelines and then look closer at Alabama’s laws so there is clear and concise education out there for people to make judgments about this case from.

Adoption laws vary from state to state. There are federal laws (think of them as standards) that are broad but the details all stay within the state laws. Most states do not allow a mother to sign away her rights to her child before that child is born. That makes sense, right? Only a few allow a mother to sign her rights away before a baby is born and Alabama is one of them. States that DO allow this usually have a means to revoke this consent but, as we are seeing, having the law and whether or not a mother is aware of, or has the resources to, make use of the law to revoke consent are two totally different things.

Alabama’s law allows for a mother to sign a consent to adoption before the baby is born. The mother then has 5 days to revoke that consent after the birth of the baby. The paper is supposed to be given to the mother at the court hearing for pre-birth consent and the judge is supposed to explain fully how to go about doing that.

Why allow for pre-birth consent instead of just letting her sign after the baby is born, especially if there is a way to revoke that consent anyway?

Because adoption attorneys and agencies have lobbied the powers that be for these pre-birth laws knowing that it makes it way more difficult for a mom to change her mind after a baby is born. Adoption is littered with corruption and pre-birth consent is just one piece of the puzzle.

Donna Ames, who represented Kate Sharp in regards to the proposed private, independent adoption of Kimberly’s unborn baby, James Elliott, has stated that she did not, nor did she ever, represent Kimberly in this case. Her representation was limited solely to Kate Sharp. This statement can be followed by two very important points.

1. If Donna did not represent Kimberly in any way, then why did she bring her to court and advise her on how to sign the pre-birth consent and also advise her about “monthly gifts” from the prospective adoptive mother, Kate Sharp? Why was Donna advising Kimberly on how to go ahead with terminating KIMBERLY’S parental rights if she did not represent her in any way? Why was Donna giving Kimberly legal advice throughout her pregnancy whenever Kimberly asked questions?

2. If Donna did not represent Kimberly in any way, then who did? Who was looking out, legally, for Kimberly’s best interests? Who was advising Kimberly through a legal process that would require her to file legal documents in an official manner in order to parent her baby?

Why was Donna able to bring Kimberly to court to sign a pre-birth consent but did not complete the process that Donna initiated when she was informed that Kimberly would NOT be going through with an adoption? As an attorney, she led her into a legal process and then removed herself from the situation and left Kimberly with no legal representation to assure that her wishes, to parent her baby, were indeed carried out. At the very least, what Donna did was not ethical by the standards set forth in most Bar Associations.

Donna also stated that she had nothing more to do with this case, at all, after the baby was born. She removed herself, entirely, from the case. However, Kimberly has reported to me that Donna was present with Kate Sharp in Judge Brown’s court room, 3 weeks after Elliott was born, to testify and have Kim declared “mentally unstable” so that Kate could take possession of Elliott. Someone isn’t telling the truth here. From the history I’ve dug up I bet you can guess who it is.

Another point, when speaking of Donna’s removal of herself from the case, is Kate Sharp’s new attorney, David Broome. David is listed a few times on the Adoption Rocks website as a referral for adoption attorneys. His affiliation with Adoption Rocks is, at the least, an association by referral. However, readers may find it interesting that David Broome and Donna Ames were both part of Judge Don Davis’ campaign committee.

I’m not sure how many of you have ever worked on a campaign committee, but it’s not going out on a limb to suggest that Donna Ames and David Broome knew each other well. She recommends him (under herself, of course) on the Adoption Rocks website and they both campaigned together for Judge Don Davis (remember, the judge who approved the pre-birth consent as well as “monthly gifts” all in the same sitting).

Clearly these people are all involved with each other. For Donna to claim that she knew nothing after she removed herself from this case, well, it’s hard to believe. 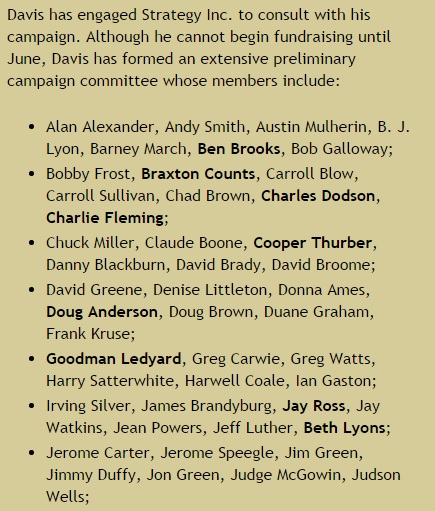 Additionally, and I’m not sure exactly what this may mean, you be the judge, David Broome (who we’ve established has, at the very least, a professional relationship with Donna Ames) is listed as an Associate with the Mobile Bar Association. Nothing out of the norm there since he IS an attorney. Except, in the same bulletin that lists him as an Associate, there is a blurb about Adoption Rocks (you know, Adoption Rocks who Donna Ames is the President of, Judge Don Davis is on the advisory board, and whose website lists David Broome for referrals). It states that the Mobile Bar Foundation donated funds to Adoption Rocks. Hmmm. Yeah, not surprising given the connections. Just one more thing that ties all of these people together. Money moving from here to there, from this non-profit, to this attorney, from this attorney, to this foundation, from this foundation, back to this non-profit. Is this the case here?

And, of course, in the same bulletin a mention of Judge Don Davis – tooting his horn.

How wonderful of him to waive filing fees so someone could adopt a baby, huh? It seems that a lot of hoopla was made about this adoption they are talking about in the article. Why did it take 4 years for this family to adopt this baby? Did Judge Don Davis help another attorney steal someone’s baby by waving fees for them? I don’t know. It doesn’t state names but I would encourage whoever this is about to come forward and tell your story. In the meantime, I’ll keep digging to see if I can find them.

Adoption Rocks and their associates seem to have their hands in a lot of different kettles. They are all intertwined in some way or another, it seems. Is it even possible for Kimberly to get a fair hearing with all of this “you scratch my back, I’ll scratch yours” going on? Please continue to share her story so these people can be held accountable in their role in all of this.

5 thoughts on “Donna Ames Isn’t As Innocent As She Claims To Be, Neither Are Her Associates; Small Town Politics”

There was an error retrieving images from Instagram. An attempt will be remade in a few minutes.