How far do some people go for attention? For notoriety? Howfar will they go to trick people for years? How many lies will they tell andwhen will it catch up with them? Eventually it always does. Unfortunately, inAdoptionland, there is a wolf among many of you. A wolf that you’ve blindlyfollowed because that wolf has used  yourpain and your story to make you feel loyal to her. That wolf has deceived andlied to you for a long time. There are only a few things (albeit major things)that I can prove are a lie but I’m sure once you all put your heads, and information,together you’ll find more. I’ve had my suspicions for some time now. I couldn’tconfirm until someone sent me her “official” story and it didn’t align withwhat I knew about her.

Emily Carol, sometimes known as Amelia LH , Amelia Harmon,Emily Upton, Elizabeth Mitchell Byars, Kate Dawson or an adoptive parent namedKD. Right now, most of you know her as Emily Carol, creator and admin in the Facebookgroup Adoption: Facing Realities. Not too long ago there was a scuffle in thatgroup and a very dear adoptee friend of mine was viciously attacked by Emily. Otheradoptees, when asking for clarification of what happened, were treated in a similarmanner and there was this whole thing where a lot of adoptees left hurt andabused.

For damage control, it seems, today Emily posted her “official”story in that group. And it just didn’t sit right with me. So, I did a littleinvestigating.

At the end of last year, Emily Upton, admin of Adoption: Facing Realities, was supposed to be a guest speaker at the Concerned United Birthparents retreat:

So far we have established the following:

Emily Upton is the admin in the Facebook group Adoption: Facing Realities. She was also set to speak at the CUB retreat as is seen in the previous 2018 post.

Emily actually has a long history in Adoptionland. I was in Realities at its conception and am still friends with the original creators and admins (all of which have since left the group). The alias names I mention in the opening paragraph of this article were once called to attention within Realities (and the following is why the admins were all booted or left). Finally Amelia LH (admin) posted that she was really Emily Upton and she was just using an alias for anonymity (like we all sometimes do). But here’s where things start to get strange (and its so much stranger than anything you’ll read here).

A mutual friend (former admin of that group) sells jewelry through a particular company. So does Emily. Emily is from North Carolina and, more specifically, has ties to Forest City, NC.

For those who have been wondering, yes, Emily Carol Upton does appear to be her legal name. She is approximately 34 years old at the time of this writing. She also sometimes goes by Emily Carol Marshall or Emily A (Amelia?) Upton. Marshall is her mother’s married name, however. What’s that you say? Oh! Her mother? Let’s see.

The only logical conclusion I can come to (and you’ll see why this is so foolproof later) is that Emily’s mother is a woman named Sandra (Sandy) Upton Marshall. Sandy is approximately 54 years old. So she was about 20 when Emily was born

You can see here how Emily is listed as her relative:

Emily’s mom also has a couple Facebook pages. This seems to be the most recent one and its very open to the public.

You can have a look see for yourself with these links:

And, Of Course, More Results

Still with me? Good.

So far now here is what we established:

Emily Upton is a real person and that is really her name. She is about 34 years old, according to public records. Her mother is most likely Sandra (Sandy) Upton Marshall who is about 54 years old. They are both from North Carolina and have ties to Forest City. Emily has multiple different names she uses both in real life and online.

Let’s get back to why I believe Sandy is Emily’s mother. This goes back to Emily’s grandmother’s obituary. Yes, her grandmother – and this is stated as fact. Since Emily sometimes goes by Emily Marshall, and Sandra is the only Marshall listed in this obituary, I make this assumption. Of course, Emily could just be using the Marshall name for bills or other things and that’s why public records is showing her as having used that name before. Interestingly enough, none of the children of Mary Frances Upton (grandmother) show as possible relatives for Emily EXCEPT Sandra Upton Marshall. Either way, one of her children is Emily’s parent.

You can view this obituary here:

And then you can view Emily’s heartfelt message to her dear old “Mamaw Murty” here:

Emily’s Tribute to Her Grandmother

Which leads me back to the reason I started this blog post. The reason I felt compelled to tell you all about that wolf among you.

Nothing about what Emily decided to “share” today makes any sense. At all. Was her mother a teenager when she had her or was she not? Was her grandmother a non-functioning alcoholic or wasn’t she? Was she a former foster youth or not?

I don’t buy it. I don’t buy any of it. If you still buy it after reading all of this (and this is only a smidge of all there really is but for privacy reasons I can’t share the rest) then you’re willfully ignoring the problem. It’s time to face the realities kids. The problem is big. The problem is HUGE. The problem is at best and elaborate lie for sympathy and attention and to elevate her voice when it shouldn’t be and at worst and elaborate hoax that has gone on for years. Everything I have seen points to the fact that Emily has a loving family. Scroll down to her mother’s second Facebook post ever – “Ha Ha! You’ve been hacked by your daughter! Love you Mama!” 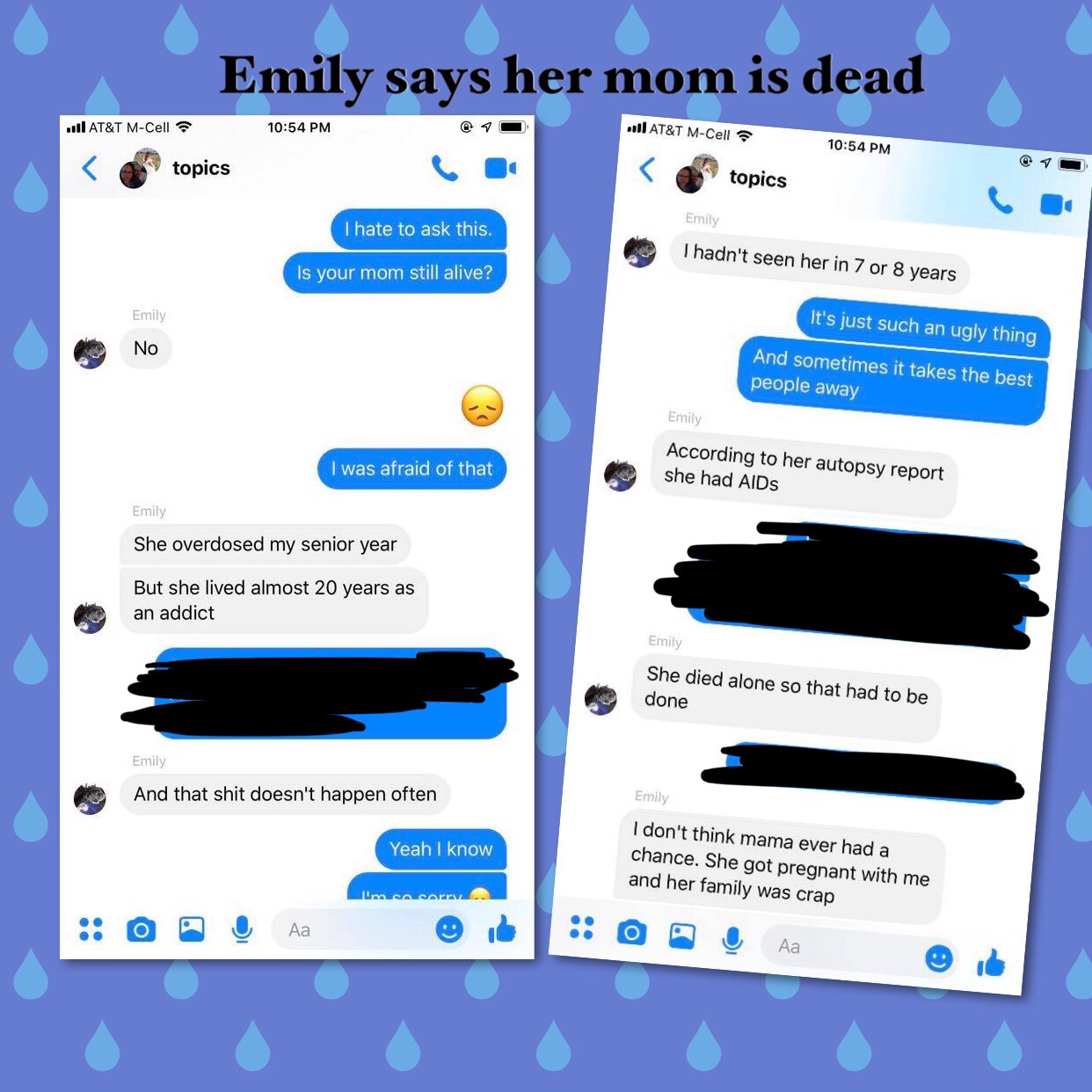 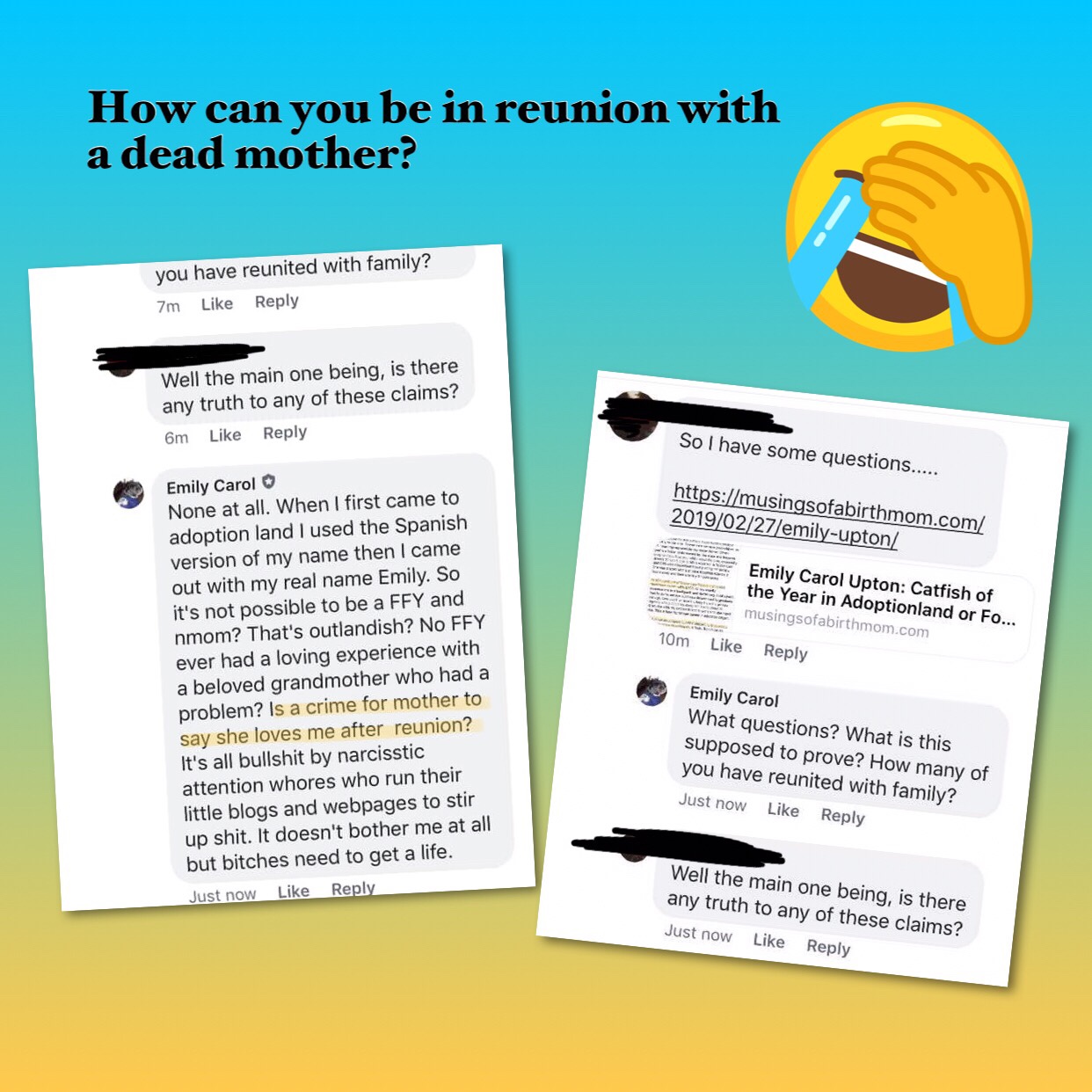 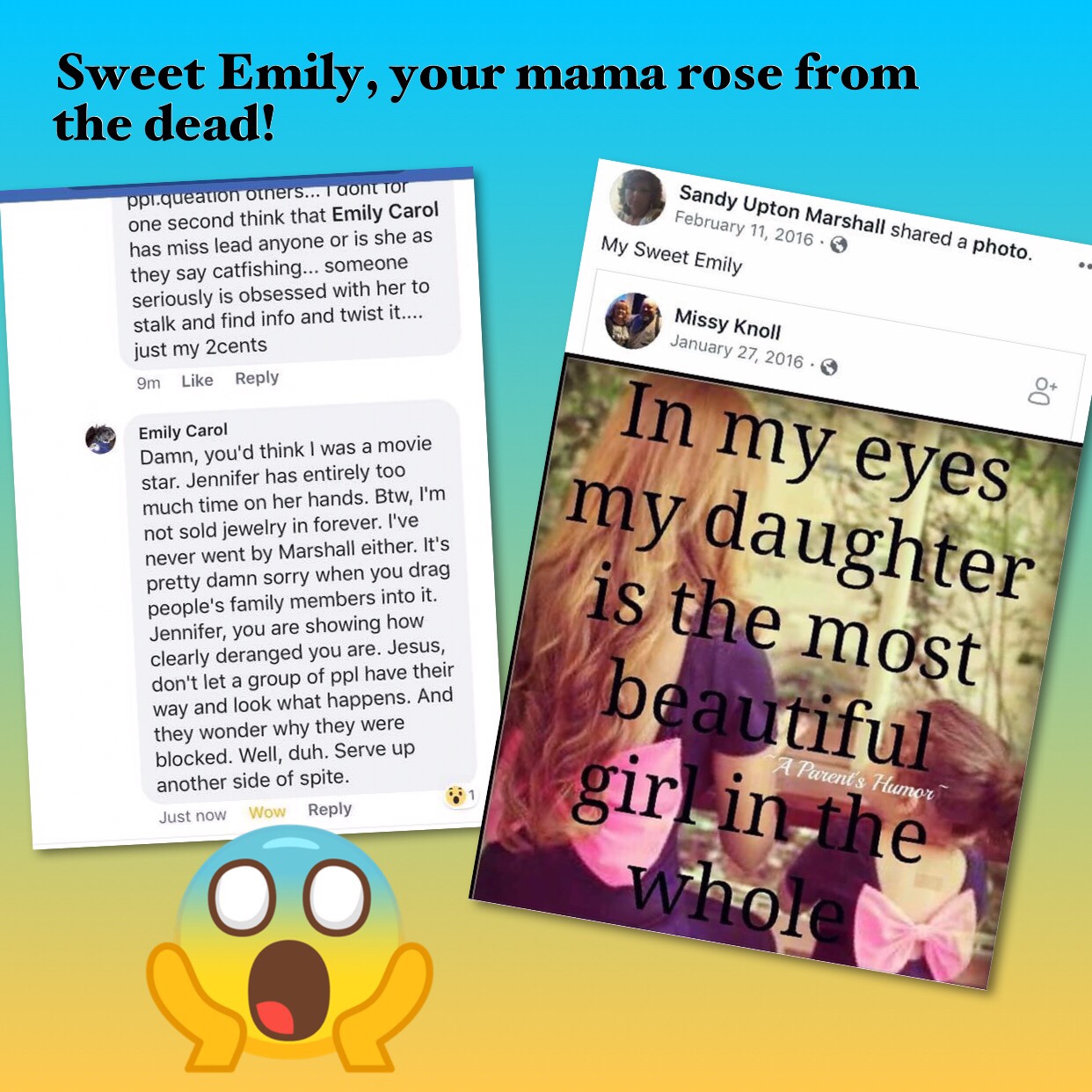 Edit: As of 1:10 am CST Emily has deleted her Facebook profile and then created a new one that was added as an admin in her Facebook group. That essentially wipes any post she’s ever made leaving no trace of her lies and deceits in various groups and messages. 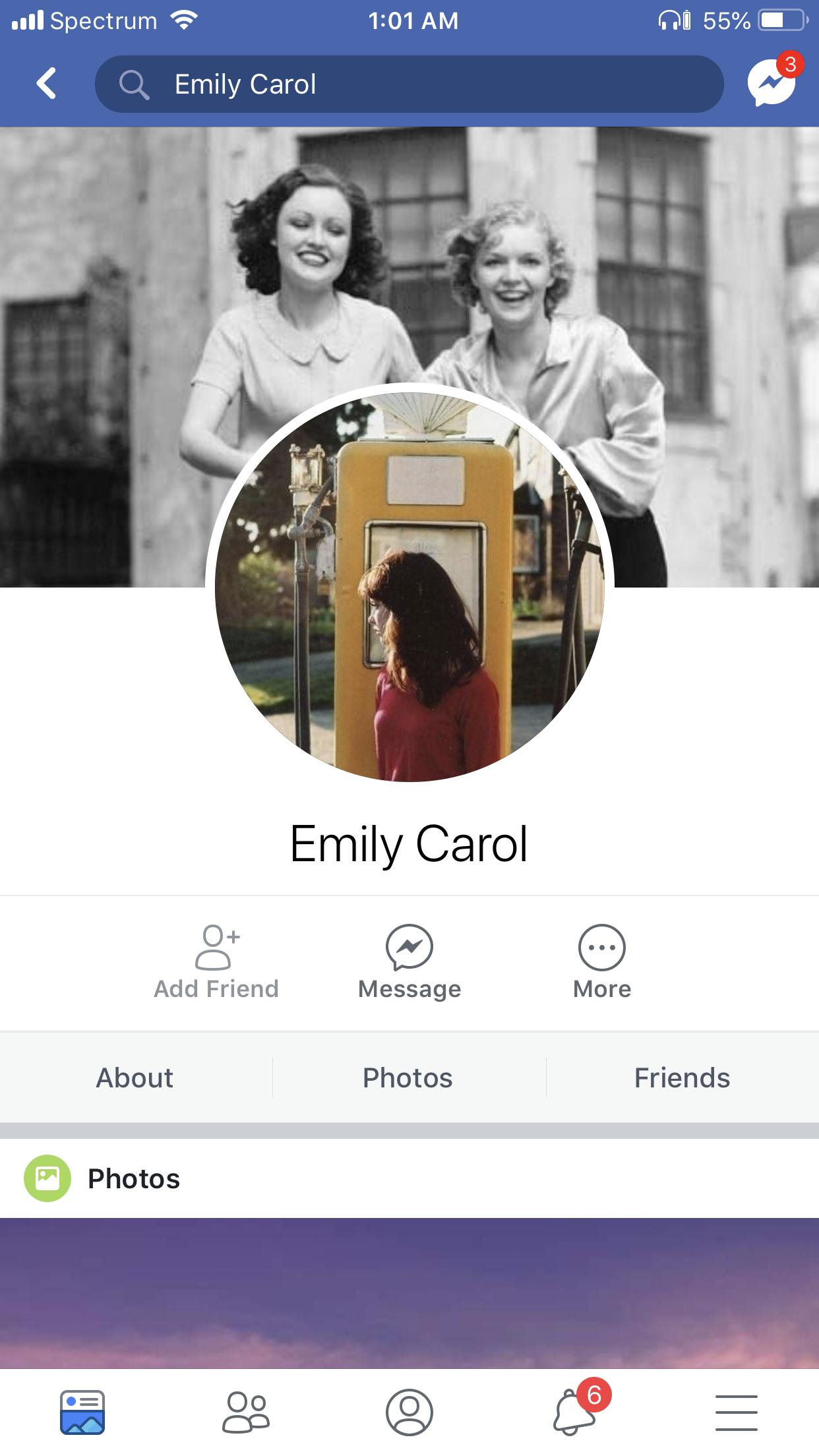 One thought on “Emily Carol Upton: Catfish of the Year in Adoptionland or Forgetful Victim?”

There was an error retrieving images from Instagram. An attempt will be remade in a few minutes.